Sometimes you can have a seed of an idea, but it takes time to get it planted and the right conditions for it to grow. After years of dreaming, we are excited to announce Mustard Seed Mountain Street Paper. Check it out!

A Foot in the Right Direction 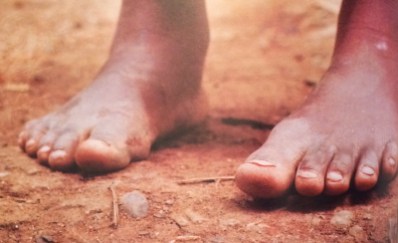 My heart quickened as I saw the police lights out front of the HoH. I was walking home from St. Joseph’s Cathedral from Holy Thursday’s Mass of The Lord’s Supper, thinking of the Christ who washed the feet of the Disciples..all of their feet. From betraying Judas to denying Peter, and all in between, the God of all Creation, stooped down as a Servant and washed their dirty feet. He then told His disciples that he had given them a model of Love to follow. This was about more than just taking a Servants role though..Jesus could of just cleared the disciples dishes, or chose some other Servant’s task but Jesus chose to wash feet- the dirtiest, lowest ranking of servant jobs.

Yet feet washing, back in the day, was a form of hospitality .. Jesus took the dirty job of hospitality and told us to do likewise. I was thinking about this, when I saw the police lights. Now distracted from my thoughts, I hurried up the street, fearing something was wrong at the house. One of my adopted kiddos came bounding down the sidewalk to meet me. “What’s going on?”, I asked. “Drug bust”, the kiddo exclaimed, too knowingly. He went on to tell me how a car got pulled over for not using a turn signal at the stop sign. Then the Police searched the car and brought out several bags of drugs. A crowd was gathering in front of the HoH, as the police took away both the drugs and the man.

I sighed. Too often, we see the effects of drugs in our neighborhood. From those who try to seek refuge from life’s pain in them, to those attempting to get out of poverty by selling them, or those now so addicted and controlled by them they submit to dark activities that demean their priceless dignity for a few bucks to buy more, to the countless secondary victims, like the kiddo talking to me.

Life in our neighborhood can be vibrant, beautiful and full of friendship..but as with many places that have faced poverty and being a community, where the majority have been minorities, there is also the wounds, sometimes scarred, sometimes healing and sometimes still festering and open due to lack of social justice. I can say watching what has happened to too many of those I love in our neighborhood- I hate drugs with a passion, but I love it’s people to the point of aching passion as well.

This scene, coming from the Lord’s Supper rattled me..this guy being taken away for his crimes. The crowd was talking about “how long” he might get sentenced for. Some were commenting he got what he deserved, some who knew him looked worried, others laughed, others speculated his circumstances and others just starred or shook their heads. I thought of Good Friday, and Jesus being arrested, taken away, and eventually being sentenced to death..Why..because He loved us past the point of the krap in each of our metaphoric “cars”, minor sins, such as a forgotten turn signal, to those “controlling substances”, whatever they may be, tucked away until we are further searched..I thought of my own sins, some that would bore you, some that might shock you, and some so evident, as the too many cookies I eat. I thought of how there is not a sin of mine that Jesus died more or less for-He died for all of them, each of them and told me I was worth far more than any of them -Him. His Mercy gave me the unmeasurable worth of His Love. His “death sentence” on The Cross, gave me an Eternal Life of His Love- A Risen Love…. Mercy, did not tell me I was perfect, Mercy loved me with something that was -Jesus. I said a prayer and hoped the man being taken away would encounter this love. I hoped he would know we equally shared in the same Savior.

I have been asked several times, why I choose to live my life as a Catholic Worker, and I can tell you I was called to it…by a Jesus, who washes feet…to include my feet. I fell in love with this Jesus who did not shame the Sinner, but persisted in demonstrating Love, telling them to do likewise. Even when Jesus knew His disciples would have to gain a greater understanding of His Love, He still brought them to the Table, He still washed their dirty feet, and fed them with all He had -Himself, Love Incarnate. Jesus, showed even the defunct disciples the Hospitality of Heaven. And so, I too, joined the ranks of ” learning to live love” disciples who have found Christ’s model being lived out in the Catholic Worker houses, such as the House of Hagar.

As we Celebrate this Easter season, please know, that as we pray for our neighborhood, we also pray for each of you who so often bring God’s Hospitality to the House of Hagar. Thanks be to God for each of you! Please keep us in your prayers too. May you feel the Heart of our Risen Lord all around you!

Reply WilliamEnemi
12:23 PM on January 22, 2018
I like to get my inspiration from really meaningful phrases said by truly great people like â??There is only one thing a philosopher can be relied upon to do, and that is to contradict other philosophersâ?�, do you know where I can find thematic compiltaions of those?

Reply JamesZOrse
5:29 PM on February 3, 2018
Many thanks for sharing, I always find out interesting things from your posts.
https://eduhelp945434737.wordpress.com/

Reply sharSix
7:55 PM on April 26, 2019
Want to safely Transfer audio from any mobile device to your pc? Check out SHAREit Share&Transfer APP! It works on PC and Android phones, very easy in use and lighweight. Download SHAREit for PC from here: https://download-shareit.com and share files between your friends!

Reply Larrymet
8:04 AM on February 10, 2020
A Deserving Essay Producing Services British isles Dependent To Cater To The many Educational Relevant | A budget essay assistance continues to be built practical by our assistance because of into the.

Reply ThomasSuism
12:23 PM on July 24, 2020
Just one belonging to the prime United kingdom essay composing products and services | Right here you should realize the pro British isles essays accomplished according to your guidance.

Reply ziscume
4:50 AM on December 18, 2020
Kamagra 100mg Test WembemiAmbiX how to buy cialis astoks Buy Voltaren Online With Out Of Pre